There is a hidden cave in Xen where evidence of Dr. Horn's presence can be found. A mysterious gate, a whiteboard with Dr. Horn's writings, a radio with a message, pizzas, Dr. Horn's and Dr. Welsh's nameplates, field lab equipment and excavation equipment are among the things that can be found in the cave. The cave is located in the first map of Gonarch's lair. One of the whiteboards in Xen there is a reference to a mysterious gate in Site 8-B, which most likely is referring to the gate found in this cave.

After the first Gonarch fight, locate this area and look for a purple plant on a ledge.

Climb up to the ledge with the purple plant and walk towards the "The Pizza is a LIE!" graffiti.

You will be teleported into this crystal cave with a visible teleport. Enter the teleport...

...and you will be teleported into a small cave with a tunnel leading to the "lair".

See the video and the image gallery above for how to get to the lair.

Alternatively, one can get there by typing the following commands into the console:

"Using" the laptop will cause a teleport to appear behind the desk near the cave wall, which leads back to a location outside.

The lair viewed from the cave entrance.

A radio with a message.

Two HEV suits with Dr. Horn's nameplates on both suits. 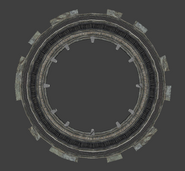 The gate viewed in model viewer.

[B. Calhoun] Miller, you're never gonna believe who i just ran into today. DR. HORN. I couldn't believe it. I thought that guy had vanished off the face of the planet. I mean, he keeps himself cooped up in those labs all day long. Sure as hell hope they have a shower in there or something, 'cuz good lord does he need it.

Anyway, we got to talkin' durin' our lunch break. Apparently, the good doctor's gettin' ready to file some complaints against multiple people, one of which being security officer Sisk! Now, you got my performance review on Sisk, and I gave that guy top marks, so, sufficing to say I was a bit put off by it. But I decided to play along, and I said, "Well, Dr. Horn, what seems to be the problem?" And that's... when things got really weird. He seems to think that everyone in his department—AND security officer Sisk—is going behind his back and stealing his slices of pizza. One by one. Out from under him when he's not looking. Says it's their way of taunting him or something. Then he goes on about saying how he thinks some of the other doctors on his team are trying to break into the labs that he and, uh... Dr. Junek... only have access to. He's even said that he's gone as far as putting down fingerprint-lifting powder to catch them by trying to match their prints. I s#!t you not. That's what he said.

Honestly, sir, I... did not know how to respond at first. I mean, normally I would have been all witty and sarcastic-like, but this was a whole new level of weird that I just wasn't prepared for, especially with this guy, so... so I asked him, "Do you have any proof?" He just looked at me, straight in the eye, and said, "I can smell the pepperoni on their breath." Then he turned around and walked away.

So... I think that guy has been cooped up in that lab for too long. That's my official stance on this. He has got the cabin fever and he is owning it like a boss.

[Officer Sezen] Hey Calhoun! Guess who just locked himself out of his office again?

[Officer Sezen] Yup. Guess who's in the vents?

[Fast paced footsteps, tapering off in the distance]

[Calhoun, in the distance] Bullshit!

Based on transcript by DUMBin8er. Additional information taken from resource/closecaption_english.txt.

In the 1.0 release of Black Mesa, the sound descriptions in the English close captions identify the voices heard on the recording as B. Calhoun (Barney Calhoun) and Officer Sezen.

The hat, jumper and shovel[]

The hat, jumper and shovel have been determined to be a reference to a British television series about archaeology called "Time Team". One of the archaeologists involved with the series used a similar colorful jumper on several occasions, and another archaeologist would always wear a hat.

There is also a reference to Time Team on the conspiracy whiteboard. "Obsession w/Time Team" is written beside Welsh's name.

The gate, which at first glance looks like a stargate, has been found to have been modeled after an Asura gate from Guildwars 2. However, Stormseeker has later indicated that the gate is not an actual Asura gate, but only similar in appearance, and the technology is far more advanced.

Two things of note are, firstly, footsteps can be seen on the ramp leading up to the gate, and secondly, electric sparks fly randomly from various points around the gate, suggesting the gate is broken.

The gate seems to be evolving. Since the lair and the gate were discovered in the Xen-Gonarch beta, small changes to the gate have been observed in various updates of Black Mesa. In total, five different versions of the gate have been recorded. In the 1.0 release of Black Mesa, the gate had grown crystal spikes on top of the frustum-like shapes or notches on the interior of the gate, and more white Xen crystals was growing on the exterior. In the June 26, 2020 update, the 3, 6, 9 and 12 o'clock crystal spikes had started to glow. In the October 30, 2020 update, all the twelve crystal spikes were glowing. In a beta for Black Mesa: Definitive Edition released on November 22, 2020, the gate had undergone a remarkable change: Sparks were no longer coming from the gate, and colored lights on the gate would suddenly start to flash in different patterns or combinations in a sequence that would repeat every 30 seconds.

The gate in its initial state.

As can be seen in the Definitive Edition released on November 22, 2020, upon entering the lair, a number of colored lights will suddenly start to flash on the gate. Eight such lights appear on the inner circumference of the gate. The colors seem to roughly match the colors of the complementary color wheel. The combination or pattern of colored lights that flash change over time. In total, the lights will flash nine times over a few seconds (3.6 seconds to be exact). The whole sequence will repeat every 30 seconds. (The exact timing can be deduced from analyzing the logic in the source file of the map.)

Initially, the meaning and significance of the flashing pattern went unsolved for several months. It was briefly noted that map entity names of entities (logic_timer) that control the on/off switching of the lights had numbers in them. These numbers corresponded to the number of flashes for a given color: 1-9-3-1-4-9-1-5. It was pointed out that these numbers could be decoded into alphabet letters to read: AICADIAE, which was close to Arcadia which had come up in other clues. At this point, however, the focus shifted dramatically when another hidden code found embedded in the names of the sprite entities that make up the flashing lights, was solved. This code is described in the section further below.

In July, 2021, when the flashing lights came up again in the Discord chat, it was pointed out that 9 could be added to the 2nd and 8th numbers:

which decoded into alphabet letters yields:

"ARCADIAN" has previously been found written on an obelisk in the map background16. An interesting observation regarding the way ARCADIAN is written on the obelisk, is that the 2nd and the 8th letters, 'R' and 'N', seem to have been made to stand out in that are written in red, while the remaining letters are written in blue.

Why the two characters ARCADIAN stand out is currently unknown. One theory is that it could be a clue related to the deciphering of the "Meet the Devs" code puzzle. However, there is also a possibility that there is a practical reason behind it.

Arcadia has also come up in a Status message clue.

In an attempt to look further into the blinking light pattern sequence, the bm_c4a2a map was decompiled. After opening the map in Hammer, a hidden numeric code was discovered encoded in the name property of each of the sprite entities (env_sprite) that make up the colored lights. These were as follows (listed in the clockwise order of the colors on the gate, starting from the top):

An attempt was made to use the string shown earlier as a running key for decrypting the "Meet the Devs" code. This failed, however, doing an encryption instead of decryption, produced the following message:

It should be noted that, even if the "Meet the Devs" code was part of the solution, it doesn't mean that the "Meet the Devs" code puzzle has been solved. One reason is that the code that was extracted from the map file is effectively a one-time pad (OTP), which would have been impossible to guess or solve in any conceivable way. Another reason is because of the way running key encryption/decryption works. A key can be crafted so that it can change any given message into another message.

Community content is available under CC-BY-SA unless otherwise noted.
Advertisement